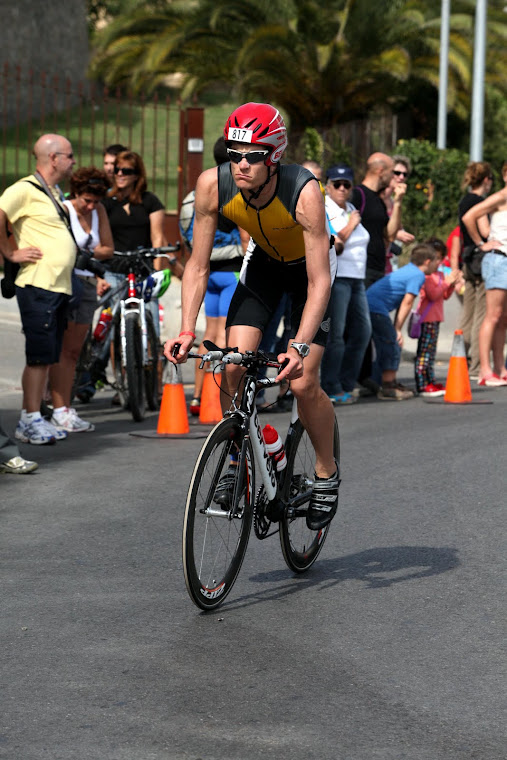 A string of good fortune

It is not often that you get to say this, but all the gods seemed to be on my side in the Barcelona Challenge in Calella. The trip, the preparations, and, most importantly, the race went down almost perfectly.

During the week ahead of the race, I felt so calm that I was almost getting anxious about not being anxious. The only worry I had was a very sore back, which was probably due to muscle tightness and, likely, a small rupture.

I had not very high expectations for the race, because it was clear to me I can't perform much better than in the Ironman Copenhagen in August. My goal was simply to be able to do a better run.

The trip to Barcelona went perfectly, not least because I had borrowed a very handy Bike Box. Not only was it much easier to pack, thanks to its four wheels it was also much easier to carry than the old Natsa bag I have been dragging around,

Unknowingly, I had some good luck when my plane arrived in Barcelona late on Friday night. The plane had to wait fifteen minutes or so before it could land due to some heavy thunder around Barcelona, but afterwards I heard the planes arriving later were directed to Mallorca. That would have been very awkward, considering I had precious little time before the race.

I tuned in for the race with some short intervals. There was quite much testosterone in the air, as guys were outsprinting each other on the bike course.

As I had suffered from stomach problems in Copenhagen, I had decided to try something different altogether. Instead of eating solid food, meat or anything that could possibly be hard to digest, I ate mostly yoghurt, juice and other liquid foods the day before D-day.

My hotel was right next to the swim start, while the bike park and transition area was located about 1.5K further north. I decided to try an unprecedented solution, as I readied my bike in the transition area the day before race day – and did not visit the bike park in the morning before the start. I use Vittoria Triathlon tubulars, which remain pressurized for several days, and I figured I can fill my aero water bottle at the first service area. That way I could get an hour of precious extra sleep and time to prepare myself without stress, thus saving energy for the race.

It was raining quite heavily in the evening, but the sky was clear in the morning. There was hardly any wind, either, and the sea was calm.

The start happened in waves, which I definitely prefer to mass starts. I was in the 8.41 wave, which meant there was already plenty of daylight and good visibilty for spotting the buoys.

I felt super strong during the swim, and I caught a lot of guys that had started in the waves before me. I get into trouble easily if the water is cold, like it was here in Calella during the Half Challenge in May, but it was so warm I was cooking inside my wet suit.

I could maintain a good stroke, but the swim felt very long indeed. I thought I would have a good split time, but when I got out of the water and saw the race clock I realized it was a disaster. 1.16 was only 10 minutes slower than, for example, my time in the Ironman Copenhagen in August. Also, my back hurt quite a bit as I was running through the transition area.

The winner Sergio Marques had a swim split of 56.59, which is telling for how slow the swim was. Some people said it was because of the strong current, which may be true.

Before the race, I had made a plan with my coach Yan not to go as hard out on the bike. Try to save a little more energy for the run. Yeah, well – I forgot that in the 25 seconds it took to run with the bike to the end of the transition area and start of the bike course.

I was flying during the first half of the first 70K lap, using a high cadence and keeping my aero position. I didn't feel any pain in my back either. The bike course in Calella runs along the shore, which means there is usually quite strong side wind. Except for the first few kilometers, it is entirely flat.

On the way back to Calella, the first of the draft trains caught up with me. A bunch of twelve to fifteen guys were flying past me, drafting each other. I hooked up with them, but was careful tp keep a 5-7 meter distance not to break any rules. Anyway, the race marshals didn't seem to mind. Every now and then, one of the marshals would pull alongside on his motorbike and tell them to split up, but to no avail.

It was not fun anymore, and I wasn't at all able to ride my own pace. Luckily, the bunch split a bit at some stage during the beginning of the second lap. I was riding alone, maintaing a steady average speed of 36 kph, until the end of the second lap, when another bunch caught me. I stayed with them, and eventually pulled clear of them during the last, 40K lap.

Big minus for the organisers for not being able to enforce the rules. It's hard for the competitors that want to race fair, too, because when you get caught in a bunch you can't really escape them. Ride faster and burn energy – they'll stick with you. Ride slower and get dropped – not an option.

On top of that, my front wheel started wobbling in a funny way and soon I found myself riding on a flat tyre. I was incredibly lucky it was no more than a couple of hundred meters to go before the transition area, and I was quite easily able to ride to the bike finish without losing more than perhaps a few seconds. It is entirely possible to ride on an empty tubular for a short distance, but it would not have been possible with clincher tires.

The bike split was a decent 5.01. That is one minute slower than in Copenhagen, but in practice it is the same.

There is always the brief moment of anxiety as you dismount your bike, wondering what your legs will feel like. This time, they felt good – and I didn't feel any pain in my back. Even my stomach felt fine.

I set out with a pace of 5:30/K, which is realistic in my current form. I was able to enjoy the first two, 10.5K laps, inhaling the atmosphere and the noise of the crowds.

I was being careful not to eat too much during the run, but that strategy backlashed. At the turning point during the third lap, I felt my energy was running low. I was struggling to even run downhill and I totally lost my focus.
At the service area, I emptied a bottle of Coke, but I immediately felt it was not enough. My blood sugar was like zero, and I was ready to abandon the race. It was some 5K to the next service area, and those kilometers were a mental battle. My solid rock forehead and my routine from sixteen Ironman races kept me going, as I knew it is only a matter of getting fuel. I was trying not to think about how much time I was losing. When I finally, after running at a crawling pace for what felt like two eternities, reached to service area, I stopped and walked through the service area, eating and drinking anything they had to offer – Coke, gel, energy bar, isotonic drink, water.
There is another minus for the organisers, because 5K is far too long between the service areas. In Ironman Nice, for example, there is a service area for about every 2K.

It was hard to start running again, but as I started absorbing the energy, the dark cloud overshadowing my mind faded away. Re-energized, it was no problem at all to run the last lap at a decent pace. I didn't suffer from any bad muscle pains, either, and was able to enjoy the run to the last sip of it. The back didn't bother me.
I finished in a time of 10.39.35. Still a far cry from my personal best, but more than satisfying at this point. Most importantly, I enjoyed the race. It was fun, racing without any problems. Of course, there was a dark moment during the run, but an Ironman is supposed to be tough.

Strangely enough, my back didn't bother me anymore. Neither would it be sore the next day. So if you suffer from back problems, an Ironman is a good way to cure it.

However, I had not been very wise when I planned my trip. My flight was due to leave 10.15 a.m. the following morning, which meant I almost immediately had to get back to the hotel and pack my bike and other stuff.

After stuffing my face with pizza slices and other unhealthy foods in the finish area, I went to pick up my bike. I was a bit surprised, to say the least, when I was able to get my bike from the transition area without showing any ID or anything. That is a major minus for the organizers. Anyone could have gone into the bike park and walked out with a bike of his choosing. For example, in Ironman Nice they use chips attached to the bike, while in Ironman Zürich they use pictures to identify you.

Well, it's not like you would sleep much after a race anyway. A guy from Finland I saw on the plane to Helsinki hadn't slept one minute.

All in all, Challenge Barcelona is an ok race. The organisation is not utterly professional, like races in the Ironman series. But the course is fast and the weather is usually warm and nice without being too hot.

Unfortunately, I heard that the race day was not so kind for everyone. One of the M40 competitors died from a heart attack during the swim. Sad to hear.

For me, the season ends here. In the winter, I will work on my running and swimming. Next season, I will aim for the Ironman Nice and the Ironman Copenhagen. Nice is a sufferfest, Copenhagen is a place to chase a good time.